The ACT Government has swapped some land in North Curtin that is now used for horse paddocks – between the Yarralumla Creek and Cotter Road, on both sides of McCulloch St and almost up to Yarra Glen – with the National Capital Authority, to use as sites for embassies. The ACT government in exchange gets 2 hectares of the edge and underwater in West Basin Lake Burley Griffin for residential development.

This is a surprise move to the public and there was no hint of it in the 2018 strategic plan for the ACT, no indication in the draft plan for the stops for light rail Civic to Woden, nor any other notice until it was announced as a completed deal in March 2020. The process of planning for the public, with the promised transparency and public consultation has been forgotten, again, despite ACT government pledges and stated intentions. The public deserves better – there must be consultation before change of land use.

In this map the creek (blue line) runs along the lower (southern) edge of the outlined area, Cotter Rd is to the north, Yarra Glen to the east, McCulloch St is the thinner black line running through the western half of the site. The red outline is the area being changed. 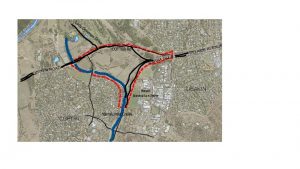 This land is grassy and treed open space, used for horse paddocks, open for kangaroos and the public to walk through (keeping dogs on leash, please) and for hundreds of birds to pass through, guided by the creek. The birds can land, feed and sometimes stay. The proposed change is to carve some large blocks from along Cotter Road down to the creek, reserved for diplomatic purposes, and also to change an area along Yarra Glen a couple of hundred metres deep from open to urban, to allow ACT government to create residential development along the proposed light rail route from Civic to Woden. The changes will remove amounts of green open space from the North Woden valley and risk an established wildlife area and connecting corridor. The land around the creek is valuable for wildlife and for community open space: this could have been developed as future parkland along the creek, satisfying birds and people alike.

Although it may be too late to head off the land swap, the use of the land for building rather than open space is not yet finalised. The NCA has opened up a website for public to make submissions and comments on the proposal to rezone this land from open space to embassy plots.

Submissions are sought by 7 July 2020. The NCA consultation process is provided here with some media articles.
https://www.nca.gov.au/consultation/national-capital-plan-draft-amendment-95-north-curtin-diplomatic-estate-and-urban-area

Richard Allen is a local resident and long term bird-observer. He writes:

The entire area adjoining Yarralumla Creek including the bike path and North Curtin Horse Paddock is being rezoned from broadacre to urban.

Many Canberra Ornithologists’ Group members will have fond memories of seeing unusual birds like Red-backed Kingfisher, Figbird or Diamond Dove and recently a pair of Cockatiels with two dependent young (probably the only breeding record for ACT). These sightings though exciting are only significant in that they demonstrate that a wildlife corridor exists here. Regular yearly counts of 100 species (overall 169 species including 14 vulnerable) speaks volumes for the diversity and value of the paddock and Yarralumla creek corridor. I have 85 records of Little Eagle, regular returning trillers, whistlers, Dusky Woodswallow, Flame and Scarlet Robin. As well as special records like Painted Button-quail, Diamond Firetail and Southern Whiteface. I was especially excited when two colour banded Superb Fairy-wrens dispersed 7km from Australian National Botanical Gardens where ANU researchers had banded the sisters at nest that spring.

Once rezoned as urban we must consider that this valuable lowland pasture and many of the above species will be lost from the Woden valley. It is a critical corridor linking the Molonglo River valley with Red Hill Nature Reserve and south through Woden valley.